After our great time in the Aeolian Islands, it was time to make tracks. We had a hard deadline to be in Croatia for the 20th June as our daughter would be flying out to join us for a week.

Leaving on the 3rd of June would give us some leeway and hopefully allow us to spend a bit of time on the Italian side of the Adriatic and meet up with an ex work colleague of mine. 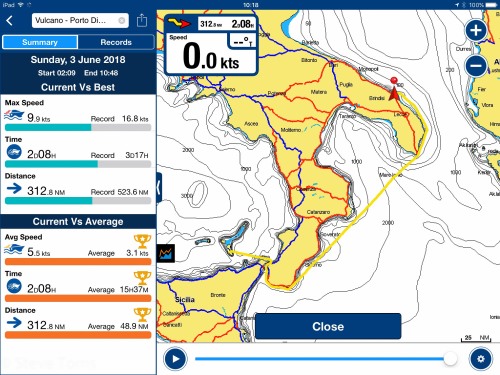 The tides can run quite quickly through the straights of Messina and it’s important to time them correctly. For anyone following in our footsteps, there is an excellent web page and app that shows the time, direction and strength of the tides at various points and can be found at www.correntidellostretto.it By utilising the app, we calculated that we’d have to leave the anchorage on Vulcano by 02:00am.

We were 5 minutes late due to the time it took to get the anchor out from under the boat that had thoughtfully anchored over it after we’d gone for an early night. Once done, it was unfortunately a motor to and through the straights.

Approaching the straights, they can be easily identified by the huge electricity pylons that used to take the power lines to Sicily.

The cables now run under the water.

We were contacted by Messina VTS (the traffic control for shipping through the straights) and asked to transit on the mainland side, just outside the shipping lane. Boats shorter than 20m are not allowed to use the shipping lanes, not that we’d want to in any case!

The VTS warned us to look out for swordfish fishing boats. We’d been told about them before but they are absolutely amazing 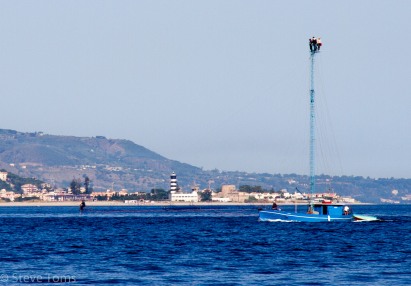 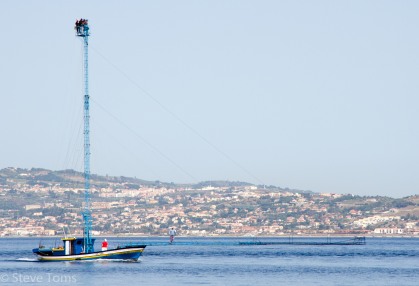 They are called Feluca or Feluche. The boats themselves are about 10m in length and have a metal tower which can be up to 30m high. On top of this the captain steers the boat and along with 3 spotters looks for swordfish resting on the surface. There is a Passarella or gangway extending 45m from the front of the boat and a harpooner waits for the captain (up the mast) to position him so that he can harpoon the swordfish.

They are an amazing sight and pretty fast. I’m at a loss to understand how they don’t capsize as they look very ungainly and the skipper throws them around, seemingly without a worry.

We headed through the straight, dodging ferries, especially at the virtual shipping lane roundabout at the narrowest point. AIS was a great help in figuring out what the various boats were doing. An American motor cruiser was pretty annoying issuing a ‘securite’ every 10 mins telling everyone on 16 that he was a 30m boat towing a 10m rib on a 25m tow. 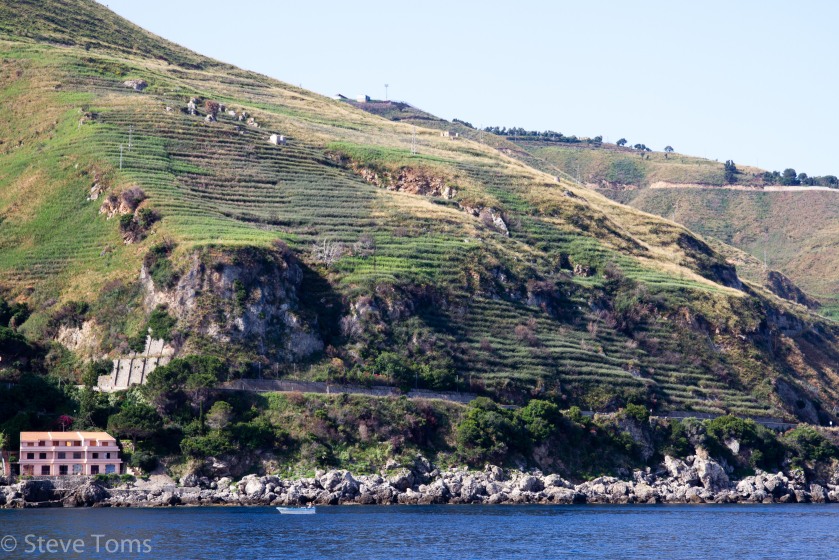 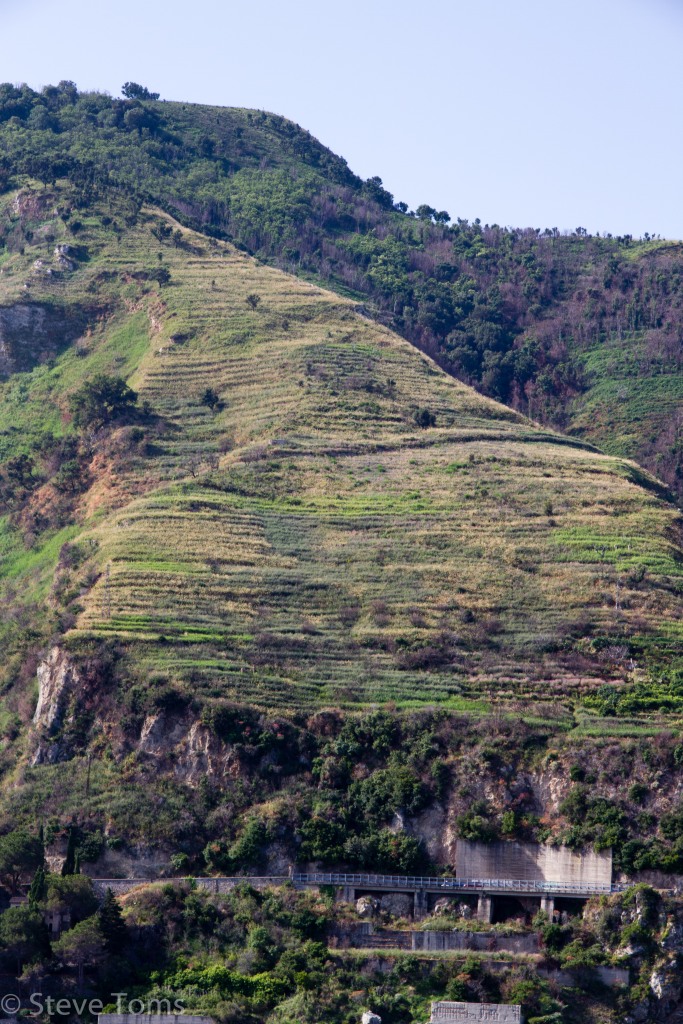 Once we got to the bottom of the straight we were able to head east, turn off the motor and sail across the bottom of Italy, we even got the cruising chute out for a few hours when the wind went aft of the beam.

At around midnight we were approaching the light at Santa Maria di Leuca and it was time to turn north and follow the coast for the final 55 miles to Brindisi. We had to stay outside a couple of firing ranges and then follow the TSS into the marina. We med moored to the pontoon at 10:43, helped in by a couple of marinaros.

We were handed a couple of forms to complete and told where the office was where we had to check in. We only intended staying here for a couple of nights and I went up to pay (€52 per night for 15-16m).

Brindisi Marina is 30mins by bus from the town of Brindisi, on the opposite side of the estuary. It is very handy if you only intend using it as a transit marina as it is just inside the large breakwaters. It has a decent café, supermarket and (expensive) restaurant. For eating out, the pizza restaurant 100m for the marina entrance is a much better option. The marina also has an excellent fuel dock.

If we were to be staying any length of time, another option was the public quay where the fee was €40 per night. This has the advantage of being in the centre of town, but it is also noisy and there is no privacy.

It soon became apparent that we would be stuck there for a few days as the weather in the Adriatic had turned unseasonably windy.  The marina started to fill up with boats coming in to hide from the strong winds. I must admit that there was some pretty impressive berthing and the marinaros were excellent.

Many of the boats were transiting from Croatia to Greece or Spain due to the high costs of keeping sailing in Croatia – worrying for us as that was our next destination!

We decided to make the best of the enforced stay and visit the town to get provisions and visit the chandlers to get the curtesy flags we’d need for the rest of the year.

We had a good day wandering along the quay 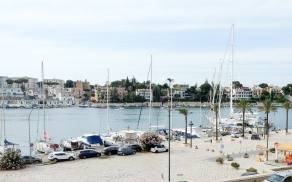 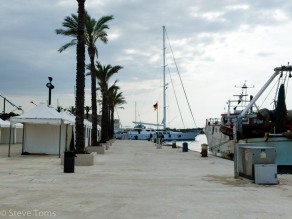 It was interesting to see that the large freighters also med moor, dropping anchor in the middle of the harbour and reversing onto the quay. It was pretty tight too!

There is a spectacular war memorial

Which you can climb to the top of where there is a large viewing platform. You aren’t allowed to take any photographs though as it overlooks the airbase and the Naval base.

The town is pleasant enough without being touristy. There are several squares with fountains and statues 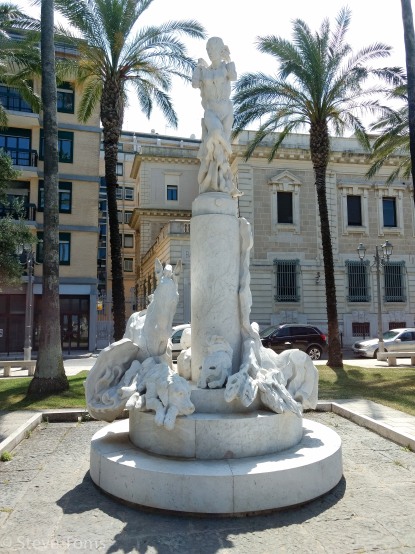 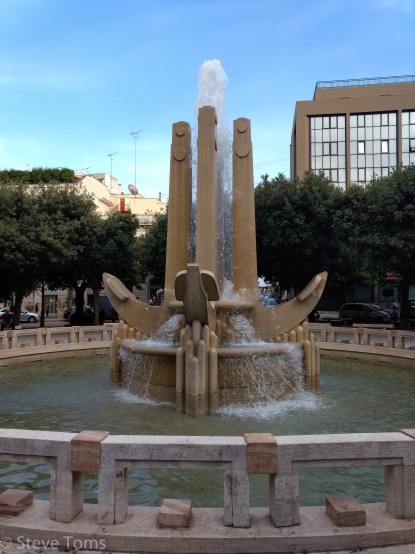 2 days turned into just over a week and on the 11th June we got a 2 day weather window where we could make the overnight sail to Cavtat, Croatia. This meant that the plan to meet up with Frank will have to be put off until next season.

We fuelled up and set sail for Croatia at 09:10 on the 11th. The next instalment will have that journey and our month there.